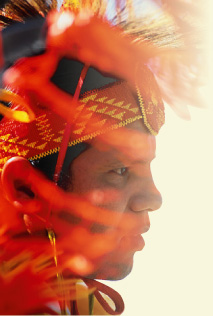 The ancient aboriginal peoples who came into the area as the Ice Ages ended are the subject of study by archaeologists, but we do know that they are the people who formed Ontario’s oldest road – Davenport.

Elizabeth Simcoe (wife of the first Lieutentant-Govenor of Upper Canada, John Graves Simcoe) mapped Davenport Road in 1796 as running from Montreal to Niagara. Only the section between the Humber and Don Rivers is still in its original location.

The aboriginal landowners of Toronto were the Mississaugas, one of three branches of the great Ojibwa nation that was the largest group among the First Peoples of Canada when Europeans arrived.

the New Credit Reserve today is near Hagersville. During the 19th century, there were Mississaugas still scattered along Davenport Road who found employment on the farms then being developed. Every year, the Mississaugas of the New Credit visit the Tollkeeper’s Cottage to share their history and culture with people in the local area. Their own pow wow takes place on the Reserve each year on the 3rd weekend after Simcoe Day (first Monday in August). The public is welcome.